Women suffer the myths of the hymen and the virginity test

Many pointed out the injustice of the practice. They argue that it is sexist, painful and traumatising. They also point out that virginity is irrelevant to whether or not an officer would be able to do her police duty.

But few have questioned yet the most dubious aspect of this harrowing practice: the validity of the test itself.

Virginity testing is not unique to Indonesia. Women in many countries are often required to endure the test for reasons that often have nothing to do with the woman’s interests. Turkey, Egypt, Morocco and Iraq, to name a few, have had their fair share of controversial virginity testing.

In one case in Turkey in the early 1990s, a student committed suicide after undergoing a virginity test instructed by the principal of her school.

The ways the test is done could vary from one place to another. We are now familiar with the term “two fingers test” conducted by Indonesia’s National Police. In some places in Iraq, the test is visual. A woman is considered a virgin when there is no visible sign of “defect” on her hymen.

In one particular village in Morocco, the test is somewhat more imaginative. A bride to be is required to undergo “the egg test”. She is to lie on her back with her legs spread out. The examiner, usually an older woman, would then crack an egg open onto her vagina. If the egg slipped into her, she would be considered to be no longer sexually untouched.

No matter the method, there are two aspects often used to determine a woman’s virginity: an intact hymen and a tight vaginal opening. Both are still widely believed to signify virginity in women; neither is a reliable basis for such a conclusion.

The myth of the hymen

Let us start with the hymen. The hymen is a membrane in the vaginal canal. Doctors are still in disagreement on its function. Many believe that it has simply no particular use to the woman’s body.

If the use of this membrane is considered a mystery, the shape of its virgin state is one of the biggest medical myths around. Many are under the impression that a virgin hymen resembles either one of these two things: a balloon-like membrane covering the vaginal canal, or a ring-like flesh with a smooth edge.

Some believe that any disturbance to the hymen will result in its tearing. Hence it is not uncommon for girls to be advised to be careful when riding a bicycle or for young women to avoid using a tampon for fear that they can break their hymen.

In reality the hymen looks more like — using the words of a doctor who frequently performs hymen reconstruction — the petals of a flower. It has notches, folds and clefts, even in its virgin state. It is flexible with different densities. Some hymens are thin and some are thicker than others.

In the event of a penetration, the hymen might be scarred. Yet, quite often, the hymen stretches and is left undamaged.

It is then inaccurate to think that a sexual act will always result in changes to the hymen. There have been many cases that show women who are in possession of an annular smooth-edged hymen can in fact have been sexually active for years.

The opposite is also true. A virgin woman’s hymen might have a big opening and several clefts here and there; this is the type of hymen that many incorrectly believe to signify that a woman has experienced sexual penetrations.

This is why sexologists, gynaecologists and general practitioners alike are often reluctant to be asked for their opinion on whether or not a woman is a virgin based on the condition of her hymen. Doctors in the Netherlands resort to using the following form of words when subjected to such request:

There are no indications to suggest that the woman in question is no longer a virgin.

Trauma to the hymen is not easy to determine – so much so there have been studies to show that forensic experts on cases of child sexual abuse often are not able to discern the signs of maltreatment on the hymen of a female child. This is especially true in cases when the child was taken to the hospital some time after her mistreatment.

The second aspect that is often checked is the tightness of the vagina. There is a widespread belief that a woman who is sexually untouched has a tight vaginal opening because of the intact hymen and that a man can discern that during intercourse.

This is a mistaken assumption. The tightness of the vagina is not caused by the hymen membrane but as a result of a contracted pelvic floor muscle. The more it is contracted, the narrower the vaginal canal is.

It is noteworthy that when a woman is feeling anxious, particularly when it comes to sex, she automatically tenses up her pelvic floor. Many doctors attribute this as the reason a virgin woman is often felt to be “narrow” by her partner.

To women who are looking to be “narrower”, doctors in the Netherlands advise them to practise contracting their pelvic muscle. This is akin to holding it in when nature calls but you simply cannot go yet.

The tensing up of the pelvic muscle was also what doctors prescribed to the woman who consulted them because she would be expected to undergo “the egg test”. The woman passed the test with flying colours.

Any type of virginity test that relies on the observation of the hymen or of the tightness of the vagina is inconclusive, at best, or completely invalid. The belief that it is easier to discern the virgin state of a woman than a man is more of a fable than a scientific fact. Unfortunately, it is a fable that is still widely believed and practised to subjugate women.

No-one, neither a woman nor a man, should ever be compelled to endure such questioning, regardless of the reliability of the exam.

But it is worth pondering that as the testing tool at hand is highly unreliable, why would anyone even dare to entertain the imposition of such fallibility?

This article was originally published on The Conversation. Read the original article.

The myths about PMS

By Cordelia Fine, University of Melbourne
It’s been a mixed week for women and their hormones.
When Maryam Mirzakhani became the first woman to win the prestigious Fields Medal for mathematics, a Cambridge mathematician suggested it would “put to bed many myths about women and mathematics”, one of which is the idea that females are not exposed to enough prenatal testosterone to excel in the field.
At the same time, other hormone-related myths were given fresh life by a new evolutionary story claiming to have uncovered the reason why women become “unbearable to live with” once a month, as one news report put it.
Michael Gillings, a population geneticist at Macquarie University, suggests in an article published in the journal Evolutionary Applications that premenstrual syndrome (PMS) evolved because it enabled women to repel men who failed to make them pregnant.

In our ancestral past, the story goes, women would have had many fewer menstrual cycles due to greater numbers of pregnancies and extended breastfeeding. Being partnered with an infertile man would therefore have gone hand-in-hand with regular menstruation.
Premenstrual syndrome could save ancestral women from evolutionarily disastrous reproductive failure. Having successfully driven off an infertile partner by means of bad-temperedness administered on a monthly schedule, women would be at liberty to seek out a fresh victim.
A well-rehearsed criticism of this kind of fanciful evolutionary speculation is that many aspects of contemporary human conditions are not adaptations; they are not “for” anything.
Contrary to popular “paleofantasy”, which holds that we embody perfected design for a long-gone era, evolutionary change is a compromised, continuously jerry-rigged process that has to always act within the constraints of what’s already there. This means many of our characteristics, including some that are typical or universal, have no evolutionary purpose.
Often, speculating about what adaptive purpose is served by some feature of a pocket of contemporary life is to board the express train to Storyland.
But Gillings argues that the high frequency of the currently “maladaptive” condition of PMS, with “often … significant personal, social and economic costs”, points to an offsetting adaptive benefit from the past.


Not as bad as all that

However, the picture painted of the incapacitating effect on modern women of their reproductive system is far too bleak.
Only a small percentage of women (estimates have ranged from as low as 1.3% to around the 5% to 8% mark) have premenstrual symptoms that are genuinely debilitating and merit a diagnosis of premenstrual dysphoric disorder.

And while 80% of women do indeed report experiencing what Gillings describes as PMS, what this actually means is that they’ve experienced potentially as little as one of a long and generic checklist of “symptoms”, such as abdominal bloating, tension, and poor sleep.
What’s more, a careful and comprehensive 2012 review of studies on mood and the menstrual cycle:


failed to provide clear evidence in support of the existence of a specific premenstrual negative mood syndrome in the general population.

Of the 47 studies identified as of being of adequate quality, only 15% found the expected link between negative mood and the premenstrual phase.
And when, in a different study, researchers looked directly for associations between moods and the ovarian steroid hormones (estrogen and progesterone) assumed to drive them, they mostly failed to find any links.
While there were a few significant correlations here and there, mood and hormones were mostly unrelated. In line with the review study, menstrual cycle phase was also largely unrelated to mood.
What did predict mood well, by contrast, was perceived stress and physical health, leading the researchers to conclude:


Taken together, our findings suggest that natural fluctuations of ovarian hormones do not contribute significantly to variations in the daily moods of healthy women.

Another major derailment for Gillings' story comes from closer examination of the implicit assumption that it’s very easy for a man to impregnate a fertile woman.
Indeed, the premise that a man can father vast crops of children by spreading his seed widely is treated as an axiom of evolutionary psychology, and serves as the foundation of claims about evolved sex differences in mating preferences.
But there are many reasons why conception might fail to take place following one single sexual act, even if both parties are fertile. It can take several months for a typical modern couple to achieve an intended pregnancy.
For women to have evolved relationship-curdling tendencies in such circumstances would hardly seem to be adaptive.
Remarkably, Gillings suggests the idea that women are maladaptively driven to corrode relationships with their irritability and mood swings will help to “depathologise” PMS.
That seems rather optimistic; attributing behaviour to internal, biological factors doesn’t neccessarily have destigmatising effects. It seems at least as likely that Gillings’ evolutionary story will instead reinforce and legitimate negative stereotypes of women as irrationally emotional.
And that should irritate everyone, no matter what day of the month it is.

Cordelia Fine receives funding from an Australian Research Council Future Fellowship.
This article was originally published on The Conversation. Read the original article.
Posted by SJ at 5:51 AM No comments:

Is it simply natural that men are more obsessed than women with all things automotive? Is it the case that even male monkeys would spend a lot of time in the garage working on their cars if they could? Research shows that in several species of monkeys, males seem to prefer things like throwing balls and rolling Tonka trucks across the floor. Is all that time men spend out in the garage simply biological destiny?[1] 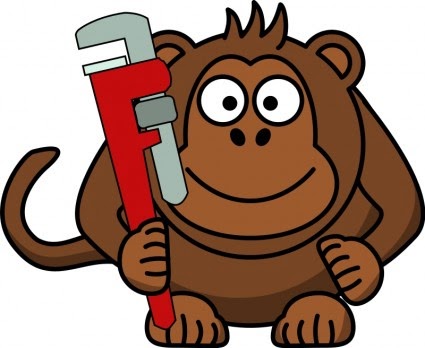 Posted by Charles S. Areni at 5:09 PM No comments: